Release 19.04 is a big functional release which will bring many improvements especially in the area of usability with it. Please find the highlights of the released summarized in the bullet points below.

Many of our users still aren’t aware that we’ve had a help text for every single attribute of the trade item editor. So what are they and how can they help you?

Tooltips are messages that appear when a cursor is positioned over an icon, image, hyperlink, or another element in a graphical user interface. We still had them in our interface for a long time, but did you recognized them?? They were somehow hidden behind that small black question mark which was placed beneath each attribute.

Our new tool tips will immediately appear as soon as a user enters an input field in the item editor. Tooltips will stay as long as the field is focused. They can be enabled and disabled at any time by using a slider on top of the page.

Have you ever watched on of the tutorial videos we’ve provided so far? Maybe you know the video which explains how to create an item in the system, it’s our most favourite one. Overall we’ve discovered that we’ve quit a lot of watchtime on our videos and so decided to increase our efforts on providing even new videos.

For this purpose we have placed a new widget in the item editor as well as in the item hit list which displays these helpful tutorial videos. The videos one the one hand will explain the most basic workflows to the user and on the other hand also give details on more advanced features.

A first bunch of videos have been provided for the April release. They will be available in german and english language and will get more and more through over the year. 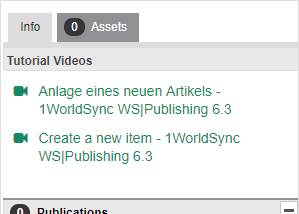 I guess everyone of you knows the item information panel which is placed on the right hand side of the item editor. In the past we’ve already changed a lot of our UI elements (remember the dashboard, hierarchy editor, hit list toolbar, etc). With our most recent release it was time to realign on the information panel.

As the old panel had some problems with displaying sometimes a lot of information on a narrow space (which indeed resulted in cut-off information and / or horizontal scrolling), we’ve took that in consideration when redesigning the panel.

The new panel now presents the information in a much more clear way. Black number panels clearly give an information on how many publications are existing for an item, how many CIC messages have been received as feedback or also the amount of exceptions.

If there are any open CICs with state review (that means your item recipient has detected that something may be wrong and advises you to check), the number bullet will turn over to a red color, indicating that there is a today.

Same will happen for any exceptions that may have occurred for your item during sent-out to your recipient. Regarding the exceptions it was still difficult in the past to get to the exception details as the link was somehow pretty hidden, nowadays there is clear link to get there.

New Icon for publication without having an answer yet

While doing the changes to the information panel we’ve also decided to do a change to the cogwheel-icon, indicating an publication where no answer has been received yet. It was mentioned to be irritating by many users, so a new icon should now more clarify the state of the item by introducing the analogy to a paper plane.

More Options For Create-Button In Dashboard

Remember the big green button in the Dashboard, providing you a immediate possibility to create trade items in the system? We’ve enhanced this button so that now a small menu pops up providing more options. You are now able to create trade items as before, but also upload digital assets (if contained in your contract) or start a bulk upload via excel. Just try it out.

Most probably you belong to our valued excel users, as we know that this feature is heavily used all over the community. And maybe you also belong to the user group which disliked the separation of item relevant information on many tabs within the excel.

Although the tabs were used to structure the data in excel equivalent to the navigation bar in the item editor, the approach has some drawbacks for the end-user. For example you need to define the item primary key (consisting of GTIN, GLN and target market) on each an every sheet and locate the item you want to change on each tab again.

To give you the choice in future, there is a new checkbox in place within the item download dialogue which allows you to by-pass the tab-separation and have all item relevant data in place on only one single tab within the download. Just try it out!

Found Most Recent Release Notes On Your Dashboard

If you are reading these release notes you’ve probably found it by clicking one of the links on the Publishing dashboard which refer to it. We’ve found out that the twitter widget did not had the big advantage we’ve hoped it would have at the beginning and that it would be a much better idea to provide a view on the news section of our Solutions Homepage on the dashboard. By doing that, all the important information on the continuous improvement of our software and the introduction of new features will be shown there were it is needed: right in front of our valued end-users.

Sometimes you may have experienced, especially when uploading huge excel files to the system, that the validation report generated for these uploads were in form of a XML file instead of the PDF. These XML files were difficult or probably more not to be handled by you as end-user. Reason for these XML-Reports was a technical restriction we’ve had in the past and that we’ve now got rid of. So you should not encounter these XML reports anymore, even if uploading big excel files.

For sure you know our Anomaly warnings you will get in any case of suspicious or anormal packaging dimensions. Also combined with the gross weight, the overall density of an item may appear questionable.

For the packaging items these messages could not be proper displayed until now. The reason for that are the often completely different measurements of packaging items, while the GPC still remains the same. Although the different packaging materials have it’s influence on the calculation (e.g. glass vs plastic bottles).

A new model has now been implemented which takes these things into account and now supports the dimensional outlier detection also on the packaging level.